The most convenient entry point into Gujarat is through the metropolis of Ahmedabad. The city contains some very fine museums, the Calico Museum of Textiles being considered among the world’s finest. Ahmedabad’s walled city is a living testimony to its heritage of crafts as women walk by in dazzling embroidered garments and flashing ethnic silver jewellery. Traditional Ahmedabad combines mosques of inspired workmanship, wooden Jain temples, unique stone stepwells and houses with ornately carved wooden balconies and window screens. 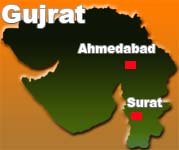 Modern Ahmedabad, just across the River Sabarmati spanned by four bridges, is a showpiece of contemporary architecture with designs by Le Corbusier, Louis Kahn and the best known Indian architects. Ahmedabad is a convenient base for a number of excursions, Modhera being the best known. 106 km away, this is one of the very few sun temples in the country.


Gujarat’s loveliest beach – and the state is well endowed with them – is Ahmedpur Mandvi whose chief attraction is the ethnic beach resort. Cottages modelled on rural Gujarati architecture look out onto a secluded beach, one of the state’s chief centres for water sports:


Gujarat is inhabited by people belonging to varied castes, religions and communities. Due to this reason, a number of varied languages are spoken in the state. The official language of the state is Gujarati. It is an Indo-Aryan language derived from Sanskrit. Gujarati is the 26th most widely spoken language in the world. In addition to this, it has eleven dialects, spoken in different parts of the state.


Gujarat shares its borders with other neighboring states of Maharashtra, Madhya Pradesh and Rajasthan. Therefore, there is a small population which speaks the respective languages of the different states also, namely Marwari, Hindi, and Marathi. Apart from this, Urdu and Sindhi are also spoken in Gujarat. Kachchh is one of the important areas in the state. It has an independent identity and is growing popular amongst tourists. The mother tongue of the people of Kutch is Kachchi. It is an important language of the region

Culture & Lifestyle
Gujarat is a flourishing state with cultural diversity. It is vibrant with its true colors of rich heritage and cultural traditions. Dating back to history with the Harappan civilization, the state becomes a confluence of many religions – Hinduism, Islam, Jainism and Buddhism. The Gujarati culture blends in arts, beliefs, customs, traditions, institutions, inventions, language, technology and values


Places of Tourist Interest in Gujarat 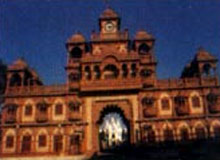 Gondal is a testimony to the great visionary ruler Sir Bhagwatsinhiji, who introduced social reforms, planned the development of Gondal town and created a model state of Saurashtra in late 19th and early 20th century. Gondal, the capital of the former princely State of Gondal, was ruled by the Jadeja Rajput clan, till the independence of India. It is a fortified town located on the river Gondali.
Sir Bhagwatsinhji's high education and extensive tours to Europe enhanced his aesthetic taste, which can be seen in the architecture and planning of public buildings, parks, bazaars dn palaces builts during his regime.
Gondal Travel Information
By Air
Nearest Airport is Rajkot (39 km)
By Rail
Gondal is a Railway station on Rajkot-Veraval line
By Road
Rajkot (39km), Ahmedabd (264km)
By Local transport
Non-Metered Autorickshaws
Mandvi Tourism

Mandvi was originally a fortified town having a fort wall of about 8m high and 1.2m wide stone amsonary. The fort had several gateways and 25 bastion ; but at present, most of the wall has disappeared. The bastion on the southwest is largest and acts as a lighthouse.
Mandvi is located on the banks of teh Rukmavati river, barely one km away from the Arabian Sea at the Gulf of Kutch. The town has a very pleseant climate throughout the year and was a summer retreat of the Kutch Maharaos. The establishment of the town dates back to the late sixteenth century (1581 AD) and is attributed to the first Jadeja ruler of Kutch Rao Khengarji
Mandvi Travel Information
By Air:
Nearest Airport is Bhuj(50 km)
By Rail:
Nearest Railway Station is Gandhidham (95 km)
By Road:
Bhuj (50 km), Ahmedabad (446 km), Rajkot (268 km)

Porbandar, originally a fortified town. with high rampart walls, bastions and five gates, lost its fortification by the order of Colonel Lally in 1888 AD. Even today, a ritual to circumambulate the fortification is performed by Hindus. 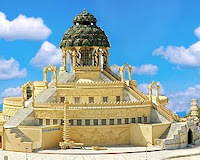 The prosperity of Porbandar was due to maritime trade and it was a thriving port in the Mughal period. It was attacked by the Portuguese in the wake of achieving supremacy over sea trade in 1531 AD. The Walker Treaty of 1807 AD between the ruling clans of Saurashtra and the British put an end to the feuds and it resulted in a favorable environment for the civic development of the Porbandar State.

By Air:
Porbandar is connected by air to Mumbai

Wankaner derives its name from the geographical feature related to the location of the town: 'Wanka' means a bend and 'ner' means water stream in Gujarati. Wankaner literally means a bend on the stream and it is located on the bend of the Machchhu river


The Jhala Rajput clan ruled Wankaner, the capital of the former princely State of Wankaner, till Indian independence in 1947 AD. It was one of the four princely states of Jhalawad, other three being- Wadhvan, Limbdi and Dhangadhra.


Sartanji founded the princely State of Wankaner in 1605 AD and the town was fortified in the late 18th century for protection against the bandits and neighboring enemies. King Amarsinhji, a noble ruler, who made Wankaner a rich city-state, ruled Wankaner up till 1947 AD.
Travel Information:

is India's eighth busiest airport with an average of 250 aircraft movements a day. It services the metropolitan areas of two cities in the State of Gujarat - Ahmedabad and Gandhinagar. The airport is located 8 km (5.0 mi) from the Ahmedabad Railway Station. It is named after statesman and former Deputy Prime Minister Sardar Vallabhbhai Patel. The airport is spread over an area of 1,124 acres (4.55 km2) with the runway measuring 11,811 ft (3,600 m).


The airport is a focus city for several Indian carriers which include Air India, IndiGo, Jet Airways, Kingfisher and SpiceJet.

We request you to provide maximum information related to your travel plan in the "Requirements" field This will help us to process your information quickly and accurately.